To share your memory on the wall of Frances Bankes, sign in using one of the following options:

On January 2, 2021 Frances passed to heaven after a year of battling health issues. Done cry she is much happier now that she is with her beloved husband and three of her four children.<... Read More
Frances Mary Fullerton Bankes, Age 81 of Dover, DE

On January 2, 2021 Frances passed to heaven after a year of battling health issues. Done cry she is much happier now that she is with her beloved husband and three of her four children.
Frances Mary Fullerton was born in Philadelphia Pennsylvania on October 20th 1939, to Frances Rita Teti Pinio Fullerton and William Henry Fullerton. She lived in south Phily for most of the first 16 years of her live, then married George Francis Bankes of Darby Pennsylvania. He joined the Air Force and the the federal aviation administration and they spent the next 25 years traveling through the US and raising four children.
After George passed suddenly in Mansfield Ohio on June 14th 1983, Frances packed up her family and moved to New Jersey to be close to her mother and family. She lived over twenty years in New Jersey. She went back to school and got a degree in social work and spent the last 10 years of her working life helping people as social worker at handicap homes, and as home health aid with the visiting nurses.

For the last 10 years Frances has been living with her youngest daughter and son-in-law, Dianne & David VanHaistma , in Delaware.
Frances was very crafty, crocheting and quilting and she love to play card games. She enjoyed visits from her Great grandchildren. She is survived by her eldest daughter Denise Dianne Bankes Miller and her husband Theodore E. Miller and their three sons, Christoper Miller,Joshua Miller and Nathaniel Miller, his wife Sarah Miller and their children. She leaves behind her sister Marie Parkhill of Turnersville NJ. Daughter –in laws Cheryl Blitman of Pittman Nj, andgrandchildren Douglas Bankes, David Bankes,and Carrie Bankes And their children. Daughter in law Lynn Bankes and her son Andrew Bankes, and his children.

She follows into heaven her husband George , Her sons David William Bankes, and George Douglas Bankes and her Daughter Dianne Bankes VanHaistma.
She was a very special lady and will be missed.
Read Less

To send flowers to the family or plant a tree in memory of Frances Marie Bankes (Fullerton), please visit our Heartfelt Sympathies Store.

We encourage you to share your most beloved memories of Frances here, so that the family and other loved ones can always see it. You can upload cherished photographs, or share your favorite stories, and can even comment on those shared by others. 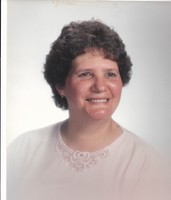