To share your memory on the wall of Paul Lande, sign in using one of the following options:

Paul truly loved his learned profession of plumbing and heating, joining The Plumbers and Pipefitters Local Union 44 in Spokane, Washington in 1972. In 1975 Paul taught plumbing at Spokane Community College, and in 1979 he started Lande Plumbing and Heating in Sandpoint, Idaho. In 1987 Paul moved his family, Susan Lande (Foresta) and their children from the west coast to the east coast settling in Bradley Beach, NJ. He then worked for Lighton Industries Inc. managing his crews for government contracts, including West Point, Rahway Prison and Dover Air Force Base. In 2003, as a self- employed contractor, Paul started his current business of X/L Mechanical, Inc. in Dover, DE and continued until semi-retirement in 2018.

In his semi-retirement years Paul enjoyed all of his friendships with local business owners and contractors, including Donna F., Brian, Leroy, FixIt, Jody, Rich, Stan, Kenny X, Charlie and Chip (you know who you are!) and a host of others. Paul was always ready and willing to help friends and family with anything he could do.

Paul was an avid traveler and loved planning vacations, in particular to the Caribbean. His constant traveling companions included his wife, Jeannie, and his brother-in-law M.J Brent and his wife Susan. Many of their vacations were to their favorite Island of St. Maarten in the Caribbean where, in 2017, they experienced the devastation of hurricane “Irma”. They were rescued after several days by military cargo planes and flown to Puerto Rico. Allowed only essentials on board, all luggage was left behind and finally received 8 months later by mail. Sadly of course that was Paul’s last trip to St. Maarten.

Paul was preceded in death by his parents, Leslie and Barbara Lande of Moscow, Idaho, brothers Charles “David” Lande (Marilyn) of Raymore, MO and Leslie Lande (Carolyn) of Brooklyn, WA.

Paul is survived by his best friend of 20 years and wife , Jeannie George Lande. Paul and Jeannie were married on August 08, 2008 in Maui, Hawaii. Their vows included “I was too late to be your first love, but I want all of my lasts to be with you”. This “last” came much too soon! Paul is also survived by his children, Lisa C Tarnowski (Steve) of Duluth, MN, Paul F Lande of Neptune, NJ, Adria M Lande of Providence, RI and Kaitlyn S Lande of Smyrna, DE. Paul was also loved and will be missed by step-daughters, Monica L Mosier (Paul) of Anchorage, AK and Jessica L Hodges (Jermaine) of Camden, DE.

Paul had a big heart and a large family that he adored. This included eight grandchildren, Steven A Tarnowski and Kevin L Tarnowski of Bozeman, Montana, Austin F Tarnowski of Duluth, MN, Madison P Lucas, Meaghan G Lucas and Evin (Alvin) T Lucas of Anchorage, AK, Kayla R Hodges and Keira L Hodges of Camden, DE. Paul also had a special bond and love for his mother- in- law Barbara A Edwards (Gordon) of Camden, DE.
In addition, Paul is survived by siblings Terry Lande (Claudia) of Bainbridge Island, WA, Brian Lande (Becki) of Pullman, WA, Jeff Lande of Colton, WA and his only sister Cheri Lande Landrum (Carl) of Colton, WA., SIL Marsha H Custer (Joe) of Dover, DE and BIL MJ Brent (Susan) of Oakhurst, CA. Paul had a host of nieces and nephews he loved very much.

Celebration of life is being planned for March 18, 2021. All plans are contingent on if and when it will be safe to fly and be together to celebrate Paul’s life.

A huge thank you to Season’s Hospice and Palliative Care (Barbara, Denise and the entire staff). We were treated with much respect and care. If so desired, please send memorial contributions in Paul’s name to Seasons, 220 Continental Dr, Suite 407, Newark, DE 19713. Memories and Condolences can be shared via www.ambruso.com. Arrangements by Michael J. Ambruso Funeral Director, Inc., Dover.
Read Less

To send flowers to the family or plant a tree in memory of Paul F. Lande, please visit our Heartfelt Sympathies Store.

There are no events scheduled. You can still show your support by sending flowers directly to the family, or planting a memorial tree in memory of Paul F. Lande.
Visit the Heartfelt Sympathies Store

We encourage you to share your most beloved memories of Paul here, so that the family and other loved ones can always see it. You can upload cherished photographs, or share your favorite stories, and can even comment on those shared by others.

Posted Jan 14, 2021 at 09:12pm
Some times you wait a lifetime for a moment like this. Sometimes he already was found.ICan honestly say I found mine to late to be his first love, but wanted all of his lasts to be with me. This “last” came way to soon! I love and miss you paulie so much.

Posted Jan 14, 2021 at 09:02pm
I miss him so much. Sometimes you meet your soul mate first, sometimes you don’t get the chance. I met mine late in life, way to late to be his first, but ready to want all of his lasts. After 20 wonderful years I wasn’t ready to let him go!
Comment Share
Share via: 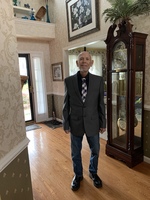 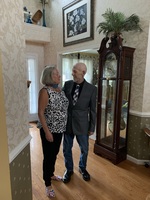