To share your memory on the wall of Frank Barbera, sign in using one of the following options:

To send flowers to the family or plant a tree in memory of Frank R Barbera, please visit our Heartfelt Sympathies Store.

We encourage you to share your most beloved memories of Frank here, so that the family and other loved ones can always see it. You can upload cherished photographs, or share your favorite stories, and can even comment on those shared by others.

Guaranteed hand delivery by a local florist
A

Posted Mar 08, 2019 at 08:11am
My deepest sympathy to each of you for your loss. Deep sorrow fills your hearts at this time. May you find comfort and strength in Almighty God. He is the Giver of life. It saddens him when we shed tears of sorrow.  Through his Word he gives us comfort and hope for those who have fallen asleep in death.

Posted Mar 07, 2019 at 11:14am
Frank R. Barbera
Paulette, Aunt Jean, Uncle Anthony, Ruth, Cousin Tony and Joan, Frank, Debbie, Mike, David, all the Grandkids, and family, friends, and Michele.
Thank you for letting me share a few words about Dad.
Frank R. Barbera was a loving husband, brother, father, father-in-law, grandfather, great-grandfather, and of course, a friend.
Dad was born in Atlantic City, NJ, on the Ides of March, March 15, 1937. He enlisted in the Navy and served honorably on the USS Ticonderoga, an Essex-class aircraft carrier built during World War II that was decommissioned after the war and recommissioned in the early 1950s as an attack carrier; Dad rose to the rank of Radarman Third Class in only four years. Dad told me a number of stories about his time in the Navy but one story in particular was how this naval warship would rock in the ocean, especially during really rough conditions. He told me about a time where nearly everyone on the bridge of the destroyer was seasick, except for two sailors - the Officer of the bridge and Dad.
After serving in the Navy, Dad relocated his family to Pennsville, NJ, and worked as Production Supervisor at Dupont for over 20 years.
As kids, my brothers and I always had fond memories of our frequent trips back to the Jersey shore, visiting with Nana and Pop-Pop and in the apartment over the Fish Market. As soon as we arrived, we always ordered Italian subs from the White House with potato chips, and ice cold Pepsi; with Dad it was always Pepsi, not Coke.
For a number of years, Dad and Paulette raised some prize winning miniature horses. Now, the height of these horses is usually less than 32–38 inches. Dad loved animals and I always sensed that Dad was very attached to these horses. It must have been very difficult for him when the time came to sell them. And don’t ever call them ponies in front of Dad. He would let you know - they are not ponies, they are horses!
I also know Dad enjoyed celebrating his birthday. In a couple of weeks, we will celebrate his 82nd birthday, but there was a time where he had a birthday every month. Dad and Paulette had a group of friends who would meet every month and go out to one of their favorite restaurants. Whenever the food server asked who’s celebrating a birthday today, Dad would raise his hand; the food server would ask for his name and he always said, “Ray”. “Ray” then received his cake and a happy birthday rendition from all of the food servers. I understand this was a recurring thing that was repeated everytime the group went out together, so we’ll have to ask Paulette,”just how many birthdays did Dad celebrate?”
As I’ve discussed with Paulette, opposites don’t always attract. But I believe Dad met his match with Paulette. My Dad met his solemate and they enjoyed 43 years together. Paulette, Dad adored you and you made him happy for a number of years.
Dad, I know you truly cared for Paulette, my brothers Frank and Mike, David, family, and me. I know our father always cared and loved us. Dad, we love you.

Posted Mar 05, 2019 at 02:56pm
Wishing you peace to bring comfort, courage to face the days ahead and loving memories to forever hold in your hearts.

Flowers were purchased for the family of Frank Barbera. Send Flowers

Posted Mar 05, 2019 at 07:48am
We are thinking of you during this difficult time. The family is in our thoughts and prayers. 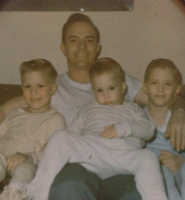 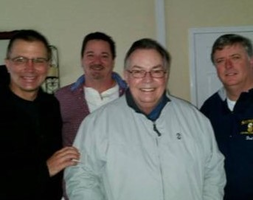