To share your memory on the wall of John Alstadt, sign in using one of the following options:

There are no events scheduled. You can still show your support by sending flowers directly to the family, or planting a memorial tree in memory of John R Alstadt Jr..
Plant a Tree

We encourage you to share your most beloved memories of John here, so that the family and other loved ones can always see it. You can upload cherished photographs, or share your favorite stories, and can even comment on those shared by others.

Plant a Tree in Memory of John
Plant a tree
8 trees have been planted in memory of John R Alstadt Jr.
SA

Posted Dec 25, 2020 at 06:34pm
We are saddened and feel a deep loss over Johnny , who was to us great uncle, uncle, brother in Law and brother. We will miss you always, The Alstadts

5 trees were planted in the memory of John Alstadt

Posted Nov 29, 2020 at 06:22pm
Our most sincere condolences to the Alstadt family. I had the pleasure of sharing many hours with John at the DSP Museum...he had an incredible love of history and indeed conveyed it well. Elisa, our thoughts and prayers for you also. John frequently shared stories of your vacations to Greece. Our heartfelt sympathies to you all. Col. (Ret.) Jim and Elaine Ford
Comment Share
Share via:
DB

We are saddened to learn of John's passing. He was a professional in his career choice and he was able to weave his love of history throughout his life and career. This was admirable and his many accomplishments will bless many for years to come. Beyond that, John was a wonderful cousin and we had many great times at Grandma and Grandpa Brown's. Good memories of days gone by... We send our sincere condolences to his brother Scott and family as well as his immediate family and friends. We send loving thoughts and prayers... Don and Marian Beckman
LS

Posted Nov 27, 2020 at 06:01pm
John and I grew up together, he was a great cousin and best friend. So proud to hear about his police career. I knew he was a police officer but he would never share with me what he did. He will be missed. Elisa, you were so important to him, you took such good care of him. Sorry Scott for your loss. Lola and Bud Sprouse.
Comment Share
Share via: 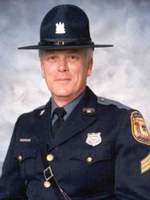