To share your memory on the wall of Josephine DePrima, sign in using one of the following options:

Jay was born August 9, 1923 in Hollsopple, PA to Italian immigrants Paulo and Giuseppina Mangiafico. The family moved to Paterson, NJ where she grew u... Read More
Josephine (Jay) DePrima of Dover, DE departed life on May 13, 2020 at the age of 96.

Jay was born August 9, 1923 in Hollsopple, PA to Italian immigrants Paulo and Giuseppina Mangiafico. The family moved to Paterson, NJ where she grew up during the depression. She was married to Anthony (Tony) P. DePrima on August 9, 1942. They were affectionately known as Tee and Jay throughout their lives. When Tee went off to war, Jay worked in factories making army coats and then airplane engines. They eventually settled in Glen Rock, NJ where they raised their son Anthony (Tony) J. DePrima. In 1997, they moved to Dover, Delaware to be near Anthony and his family.

Josephine was a devoted wife, mother, grandmother, great grandmother, aunt, cousin and friend.
Her memory will be cherished by her son Anthony, his wife Janet, her grandchildren Terri, Angela, Paula and her husband Aaron, her great grandchild AJ and her niece Dolores who was very special to her. She had many nieces and nephews who she loved very much.

She loved to bowl, golf, and teach her granddaughters how to cook Italian food. She travelled all over the world with Tee. She always believed in dressing well and looking proper. In Dover, she was an active volunteer at the Modern Maturity Center and Delaware Tourism. Her favorite saying was “stay strong,” which she did until the very end.

A private service will be held at The Funeral Home of Michael J. Ambruso, 1175 S. State St. Dover, De. In lieu of flowers, donations can be made to the Dover Library Foundation, PO Box 112, Dover, DE 19903.
Condolences can be made at www.ambruso.com
Read Less

To send flowers to the family or plant a tree in memory of Josephine DePrima (Mangiafico), please visit our Heartfelt Sympathies Store.

We encourage you to share your most beloved memories of Josephine here, so that the family and other loved ones can always see it. You can upload cherished photographs, or share your favorite stories, and can even comment on those shared by others.

Posted Jun 03, 2020 at 09:32am
Our deepest condolences to the family for your loss. May God support you always going forward.
Cecil & Clealyn Wilson
Comment Share
Share via:
MB

Posted May 21, 2020 at 04:52pm
It is with deep loss and sadness that we bid farewell to our dear loved one, Josephine De Prima. She was mine and many other’s aunt, she was your mother, mother-in-law, grandmother, friend, and more. To know Jay De Prima, as she was known to many, is to know that she loved family more than anything else. Her life was built on a solid foundation of her faith in God. Her tenacity and love for others was most transparent. Aunt Jay could always be found cooking, sharing pictures and memories with her loved ones and smiling so sweetly when you told her any story. Growing up we all shared fond memories of family gatherings, barbecues in Glen Rock with Uncle Tee and Aunt Jay and Sunday pasta with meatballs and always some good Italian bread to go along with the meal. Aunt Jay loved sweets of any kind and stopping off to get Sicilian twisted Italian bread, cannoli’s, or anisette cookies brought her such delight when we traveled to Delaware to see her! I will always appreciate her unconditional love that she had for me and her entire family. It was Aunt Jay who gave me my first introduction to the Daily Word. Aunt Jay loved life, helping others and most of all ---gathering her family together. This was most important to her. If she was not volunteering her time to serve a meal, she was praying for someone. Aunt Jay was a woman of faith. Often times on our distant phone calls she would say, “Mary Ann, I feel the Holy Spirit about me”. She would love to inquire about all the family and in these last weeks ---as hard and difficult a time it was for her…she was asking how all her nieces and nephews were doing in New Jersey. As together we circle this place in love, I know that Aunt Jay would be proud of all her family and would be so pleased to know that she was indeed loved by all. It will be our testimony of faith to live hereafter with her mark of goodness on our lives. In such a time of sorrow, I pray God’s abounding love, grace, comfort and peace will be upon all of us , and especially Tony and Janet for your steadfast love and commitment that you gave selflessly through the years. We will remember our dear friend and loved one, Josephine De Prima, as a true example of a righteous woman, putting others first, working hard and maintaining a lovely family unit. This I believe will be Aunt Jay’s legacy. We miss you already Aunt Jay, but we take courage in knowing that although we may not be able to be with you in the physical sense, you are indeed with us in spirit. May God bless you now and always and may you forever Rest in Peace…until we meet again.

Posted May 19, 2020 at 12:52pm
Hi Tony: We at HELP Initiative, Inc. offer our condolences, and sincere sympathy. You and your family are in our thoughts and prayers. 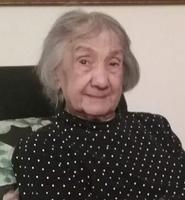