To share your memory on the wall of Joseph Malago, sign in using one of the following options:

Provide comfort for the family of Joseph Malago with a meaningful gesture of sympathy.

He was predeceased by brothers, John Malago and Eugene Malago; sister, Dorothy Thompson, and daughter, Holly J. Malago.
A private graveside service was held for family members. Due to the recommendations imposed by the CDC and the State of Delaware concerning gatherings,
A Mass of Christian Burial will be offered at a later date at Holy Cross Catholic Church, Dover. Please feel to share a memory or condolence with the family via the webpage.


In lieu of flowers our family asks that memorial contributions be made to the Alzheimer’s Association-Delaware Valley Chapter, 240 North James St.,Ste.100A, Newport, DE 19804. or Delaware Hospice, delawarehospice.org
“YOU WILL LIVE ON FOREVER IN THE HEARTS OF EVERYONE WHO HAD THE PLEASURE OF KNOWING YOU
Life End Services by Michael J. Ambruso Funeral Director, Inc. Dover.
Read Less

There are no events scheduled. You can still show your support by sending flowers directly to the family, or planting a memorial tree in memory of Joseph E Malago.
Plant a Tree

We encourage you to share your most beloved memories of Joseph here, so that the family and other loved ones can always see it. You can upload cherished photographs, or share your favorite stories, and can even comment on those shared by others.

Posted May 03, 2020 at 11:55am
Our condolences to the Malago family from Richard Senato and family. We first met Joe in Bermuda in the mid seventy's while staying at the Holiday Inn. And, again when I moved to Dover and owned an appliance and refrigeration business and did his service work, Joe always had a big smile and made you feel welcome. God bless Joe and his family.
Comment Share
Share via:
CF

Posted Apr 20, 2020 at 02:42pm
Beckie and Family, so sorry for your loss. May the peace of God be with you all. I pray you find comfort in knowing his memory will live on.

Posted Apr 17, 2020 at 10:56am
My deepest heart felt sympathies go out to the Malago Family. I worked for them at both General Tire stores and enjoyed working for them. Xxoo to you all. Wishing that I could be there. Bryan W. Steilkie, Jr......Fort Atkinson, WI.
Comment Share
Share via: 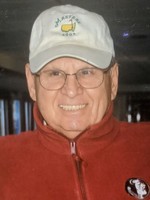